Siberia and the North Pole from the Air 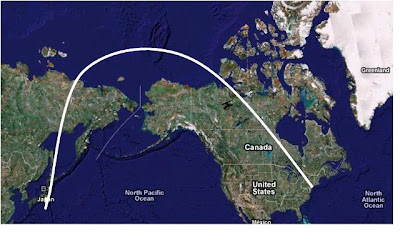 When you fly from New York to Tokyo the flight goes very far north, depending on the winds the plane will fly anywhere between southern Alaska to very far north to the point that you end up hundreds of miles off the north coast of Alaska fairly close to the north pole(see my photos of Alaskan mountains from a flight last year here).

When I flew to Tokyo last week we ended up taking the extremely far north route which put us quite a ways north of Alaska. Given that it’s winter we were farther north than the sun shines, when you look out the window on the south side of the plane you can see the glow of the sun as though it's about to rise from the south except that it never does it just stays that way for hours. On the north side of the plane you get an even stranger view, you can see the night on the far side of the planet. The sky to the north is purple fading to black close to the horizon where it’s night time for the far side of the globe (which is not so far away up there), it’s very odd to look at.

The other interesting thing that happens when the plane goes that far north is that when the plane finally turns south you end up flying over Siberia. I’ve flown over Siberia a few times but it has always been cloudy or dark (when you fly in the opposite direction back to the US), but this time the sky was clear so we had an amazing view as you can see in the photos below. What amazed me was how rugged Siberia looked and the fact that we flew over mountains like this for a VERY long time and never saw any trace of people, no roads, no pipelines, no settlements, nothing (See the full set of photos here): The river looked like it was dry from the air but it is just frozen over: The winds must have been very high, snow was blowing in a number of places like this: The rugged mountains went on and on as far as the eye can see: When we reached the coast I was amazed to see that the mountains continued right up to the water: As can be seen the ocean was frozen over in many places: We finally saw signs of people when we overflew the Russian controlled islands to the north of Japan, these islands are very rich in natural gas, you can see the seismic exploration lines in the photo below: