I'm very behind on blog posts so I figured I would post a copy of the update email I sent out today:

I’ve been promising a number of you that I would send an email update about my around the world trip for quite some time so I figured I better get around to it sooner rather than later.

The trip so far has been fantastic. I am in Singapore at the moment, I’ll be here until Wednesday when I head to India for a friend’s wedding and related travel.

This past week I passed the halfway point of my trip both time wise and distance wise. To quickly recap the trip I spent a little more than a month in Japan with Miho. The time in Japan was really great, it gave me a chance to see and do many of the things I meant to do when I lived there but didn’t get around to at the time. Miho and I took a trip to southern Japan to see Miyajima (click here for photos), Hiroshima (click here) and Nagasaki (click here). I spent the rest of my time hanging around Tokyo with Miho and visiting friends, which was a lot of fun (see here for favorite pics from Japan).

In early March I wrapped up my time in Japan and flew to Seoul, South Korea for a few days. This was my first time in Korea and it actually wasn’t originally part of the plan for my trip. It turned it was cheaper to get from Japan to China via Korea so I spent a few days exploring Seoul and seeing the DMZ. (see here, here and here). I really liked South Korea, the food was great and the culture was very interesting it was definitely a really worthwhile side trip.

After spending a few days in Korea I moved on to China where I spent a little more than three weeks exploring the country. My time in China was fantastic, I honestly wish I had a couple of months to explore China. I started my time in China in and around the Beijing area (click here), where I visited the Forbidden City (click here), hiked the Great Wall with a few guys from the hostel (click here), saw the summer palace (click here) and generally explored the city. Beijing is a very interesting and dynamic city, especially right now with the preparations for the Olympics. One not so great thing was that my time in China happened to be when the crack down in Tibet occurred. The day the Tibet protests broke out I was in Tiananmen Square and I saw Chinese police and soldiers beat an old women, it was one of the worst things I have ever seen and definitely made me a big supporter of the protestors and their cause.

From Beijing I continued on to Xi’an where the Terracota Warriors are located (click here). The warriors were amazing to see, Xi’an was definitely one of the highlights of my trip. I then took an overnight train to Shanghai (click here) where I met my Dad who joined me for a little more than a week in China and Vietnam. Dad and I took a side trip to Suzhou (click here), a very beautiful town outside of Shanghai full of world heritage listed gardens and cultural sites.

My Dad and I then flew to Hong Kong where we made a very brief stop between our flights and then continued to Vietnam. We spent most of our time in Hanoi (click here) where we toured around and I started working on a project with the NGO. My Dad and I wrapped up our time travelling together with a trip to Ha Long Bay (click here) which was amazingly beautiful and very relaxing. We also had the amazing experience of having a live aboard boat all to ourselves, there was supposed to be 8 people but we had the boat to ourselves. I spent the following week working for the NGO which sent me to Hue, Da Nang and Vientiene, Loas. I didn’t take many photos that week because I was working but a small set can be found here.

When my time in Vietnam came to an end Miho flew in from Japan and met me for a trip to Cambodia. We started in Phenom Pen (see here) where we met her friend Crystal and Sandra a friend of hers. The four of us then travelled to Siem Reap to see Angkor Wat and the surrounding temples. The Angkor area is unbelievably beautiful and amazing, it’s hard to find words to describe it, it definitely was one of the highlights of my trip (see here and here).

I’ve since travelled on to Thailand and now Singapore but I haven’t had a chance to put the photos on the web so I’ll include that in a later email. For those who’d like to see all the photo sets in one place, please click here. I also have my travel blog at www.ryansrtw.com but I am very behind on blog posts. China blocked my blog so I fell behind while I was in China and I haven’t yet had time to play catch up, sometime soon I will get the blog back up to date.

I hope all of you are doing well, drop me a line and let me know how life is treating you.

I didn't actually intend to visit Korea as part of my RTW trip, but it turned out to be cheaper to fly from Japan to China via Korea than to take a direct flight. So, I flew via Korea and decided to take a few days and stop to visit the area in and around Seoul while I was passing through. My first day in Seoul was a Sunday which was great, the city had a lot of open air markets and other outdoor activities as can be seen in the photos below. The full set of photos can be seen here

I was staying in Insadong, a famous neighborhood with street shopping, arts and crafts and traditional restaurants. It's famous for it's street shopping as you can see below it was crowded and busy on Sunday: 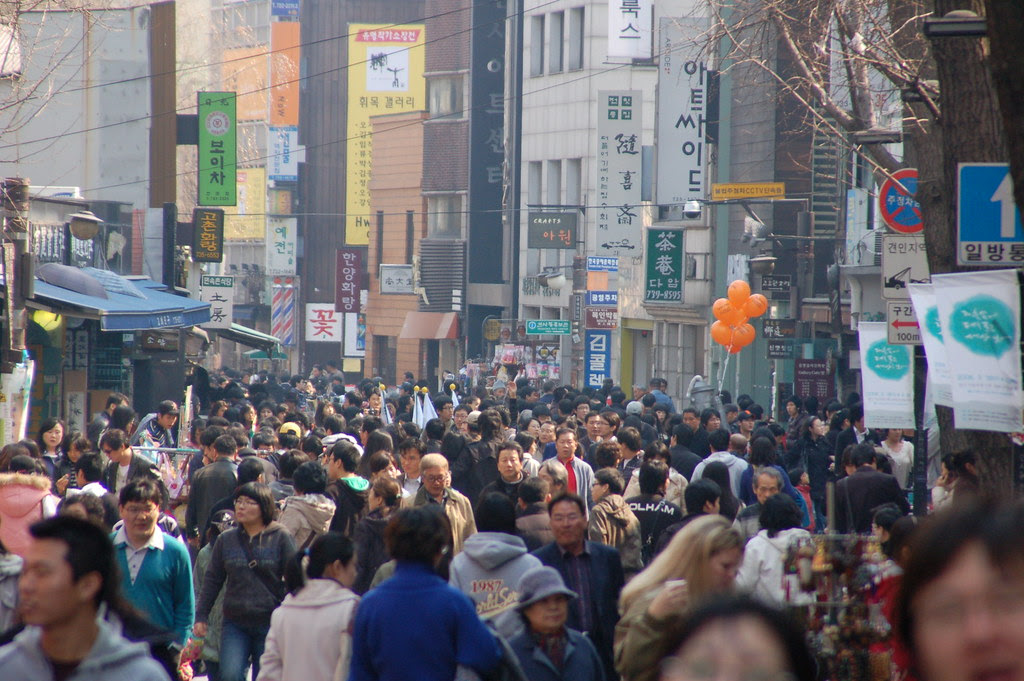 Insadong had all sorts of things going on in the streets, everything from a person in a robot costume who was offering to dance with passers by (I have no idea what the deal was with the dancing robot but it was very entertaining): 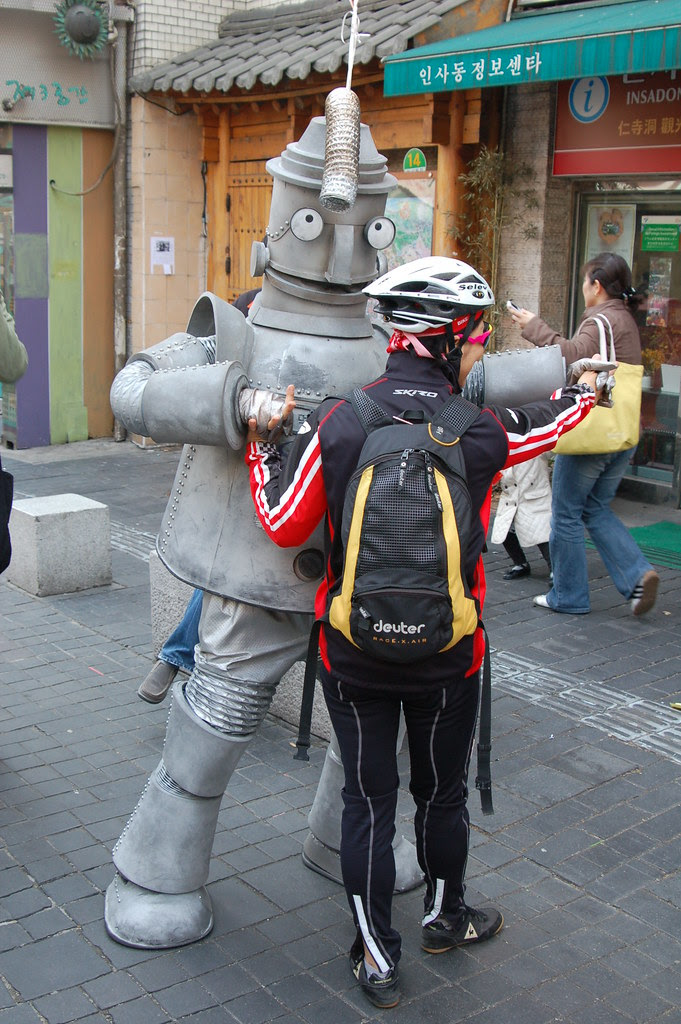 To traditional foods in an outdoor market: 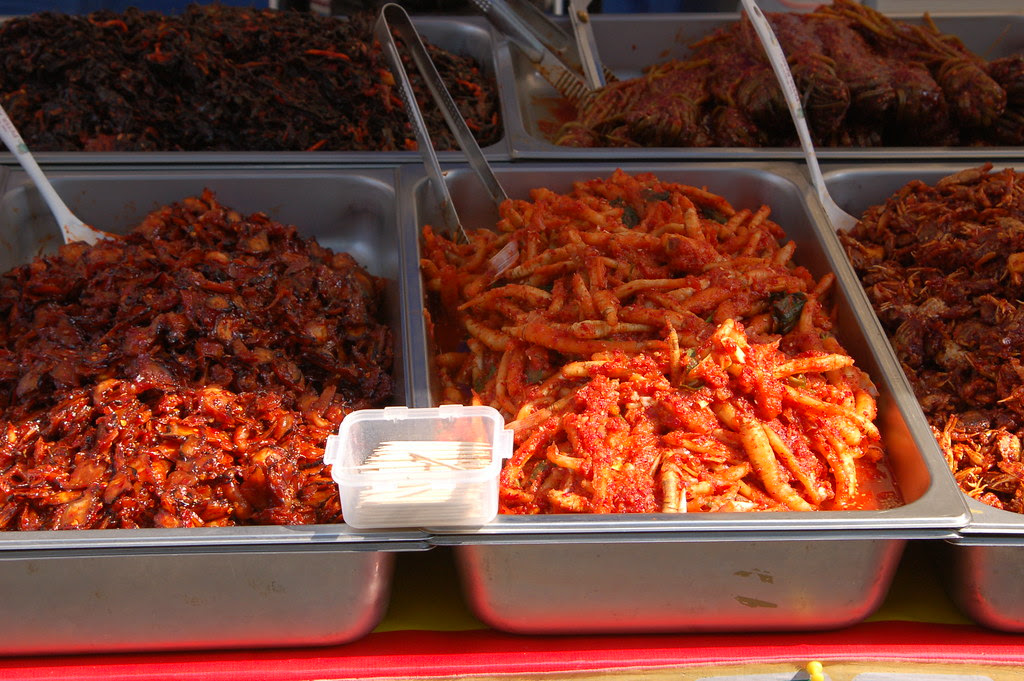 There were also a lot of local people hanging out and enjoying a leisurely Sunday, the group of old men below were having some kind of round table discussion/spirited argument, I really wish I could understand Korean what ever they were discussing seemed interesting: 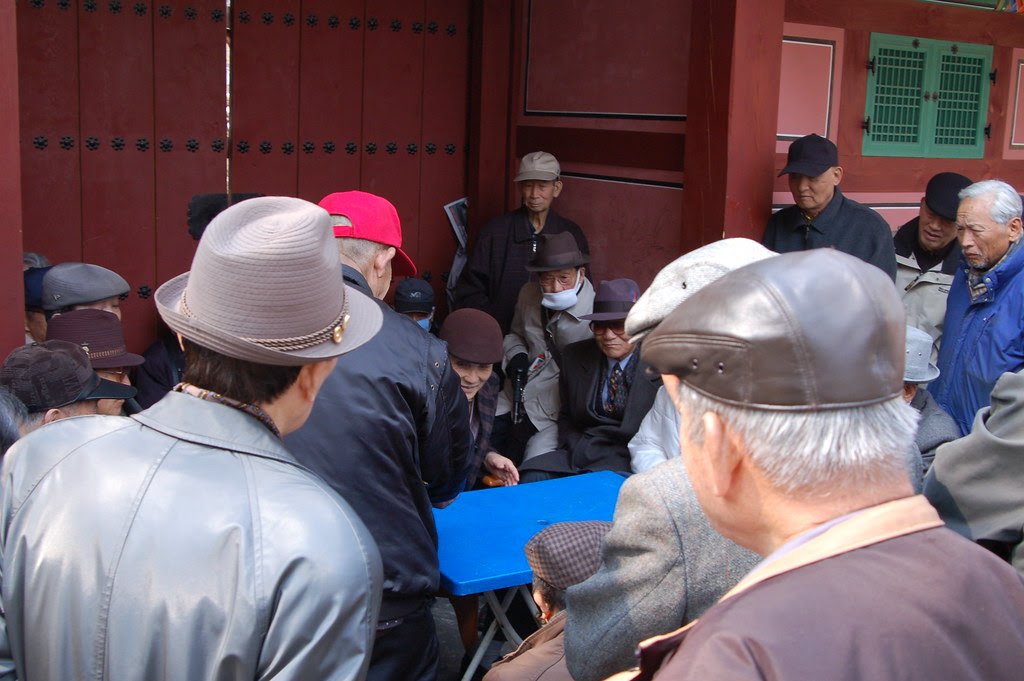 The Insadong area is also very close to Jogyesa Buddhist Temple, which was really cool to see: 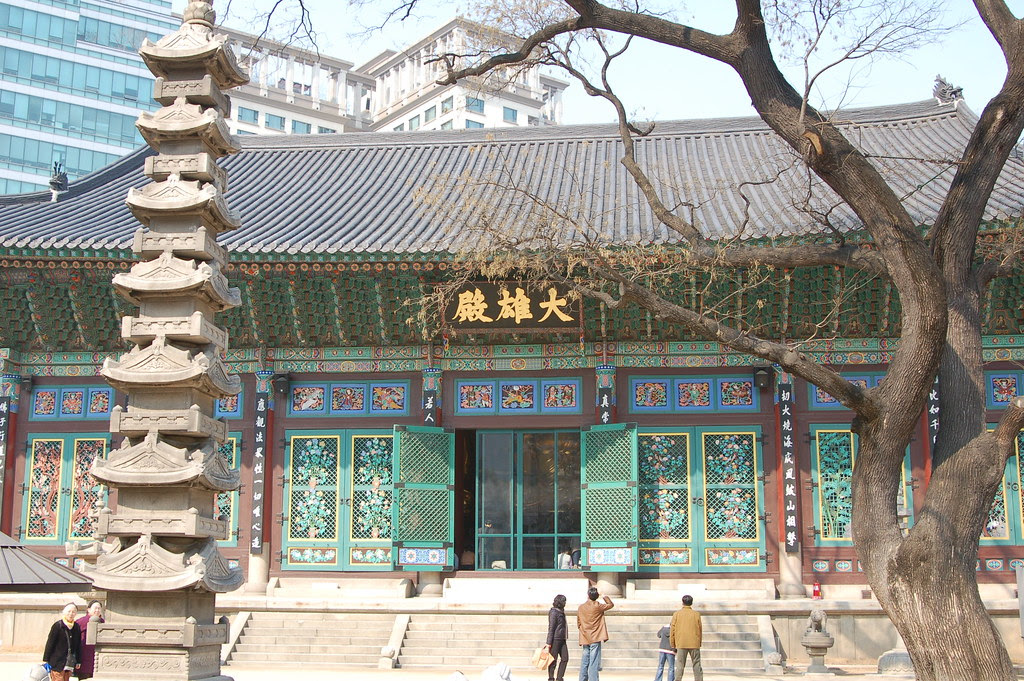 They are in the middle of redoing the roof of the temple so they had the dragons shown below sitting next to the building, I really liked the way they look, it was great to see them up close and personal rather than on top of the roof where they normally are: 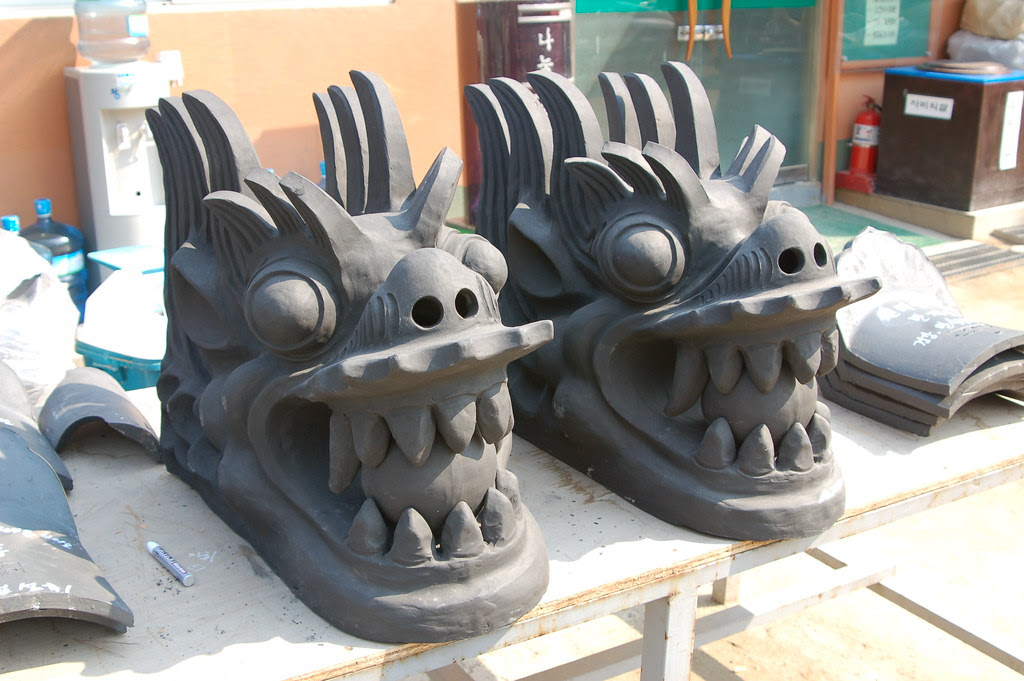 I wandered through the city for the rest of the day and went to check out what's left of Namdaemun Gate. Unfortunately a few weeks before I visited Seoul the gate, which is one of the most famous landmarks was burned down, by the time I got to Seoul it had been encased with the wall shown below so they could begin sifting through the wreckage and begin rebuilding: 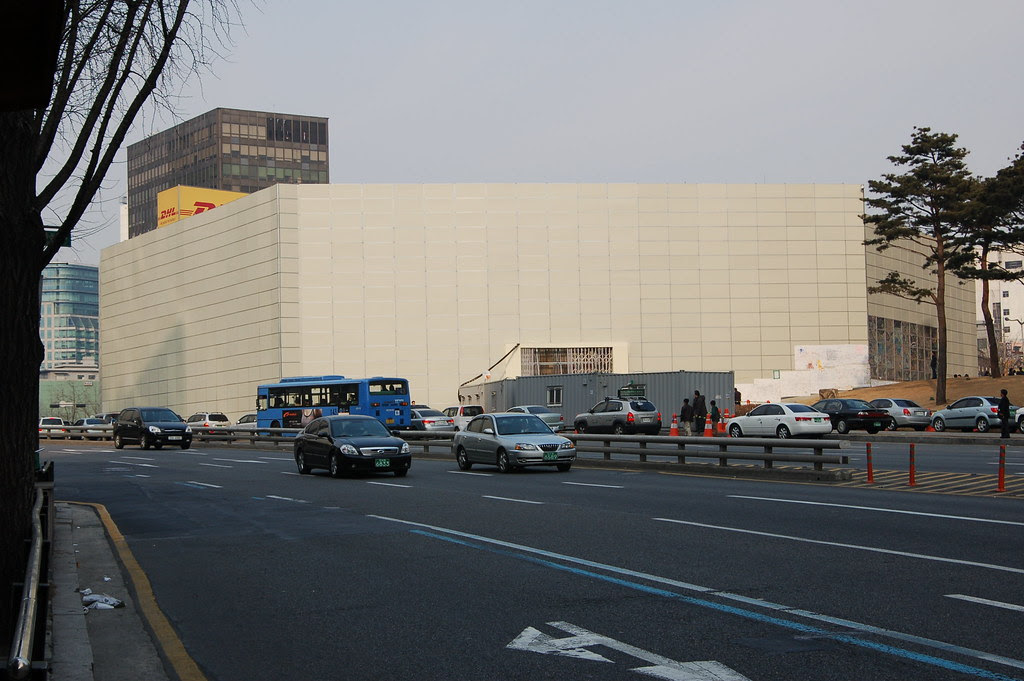 On the outside of the walls Korean children (and adults) had posted drawings and writing about the gate: 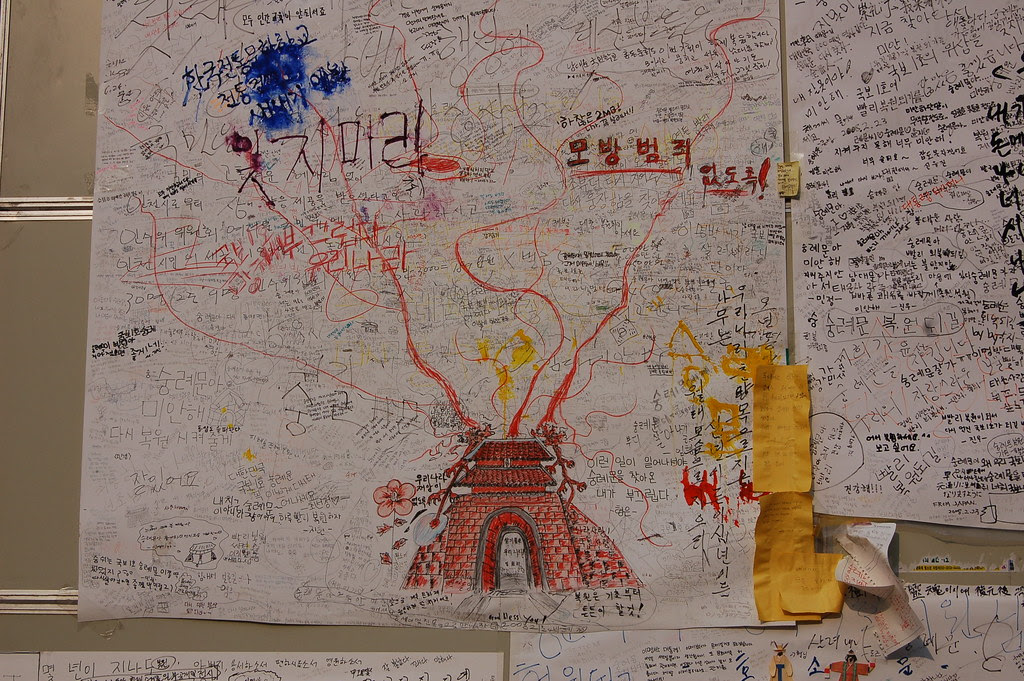 Across the street from the gate there's a really famous market, Namdaemun Market. The market was really crowded and had pretty much everything you could ever want for sale, as you can see below it was full of people: 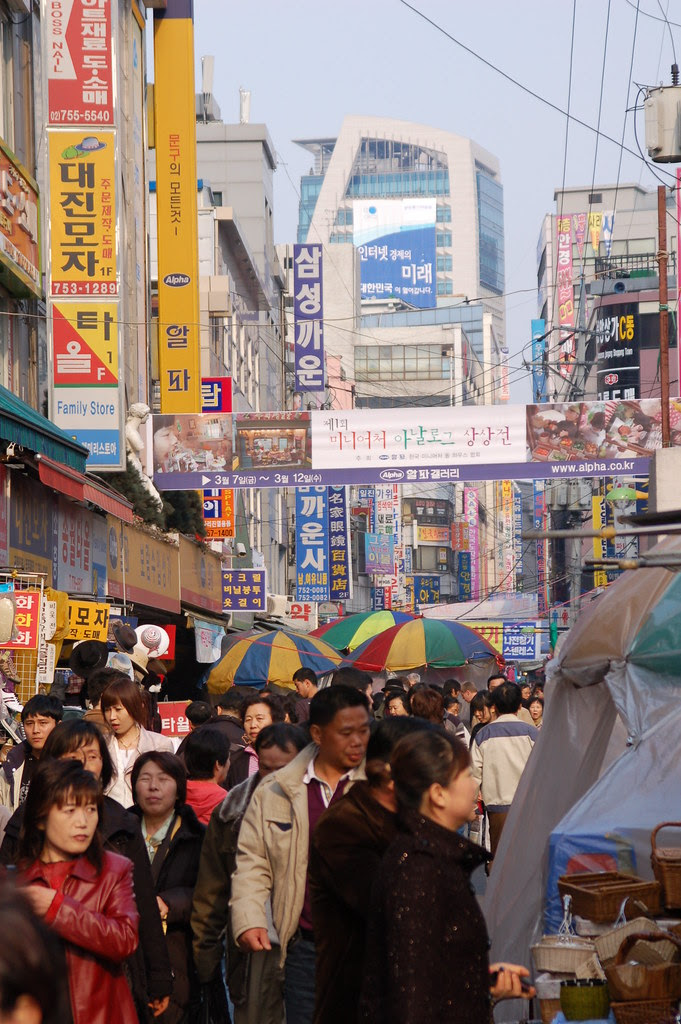 There were lots of colorful things for sale including the home made candy shown below, check out the full flickr set to see other photos of the market 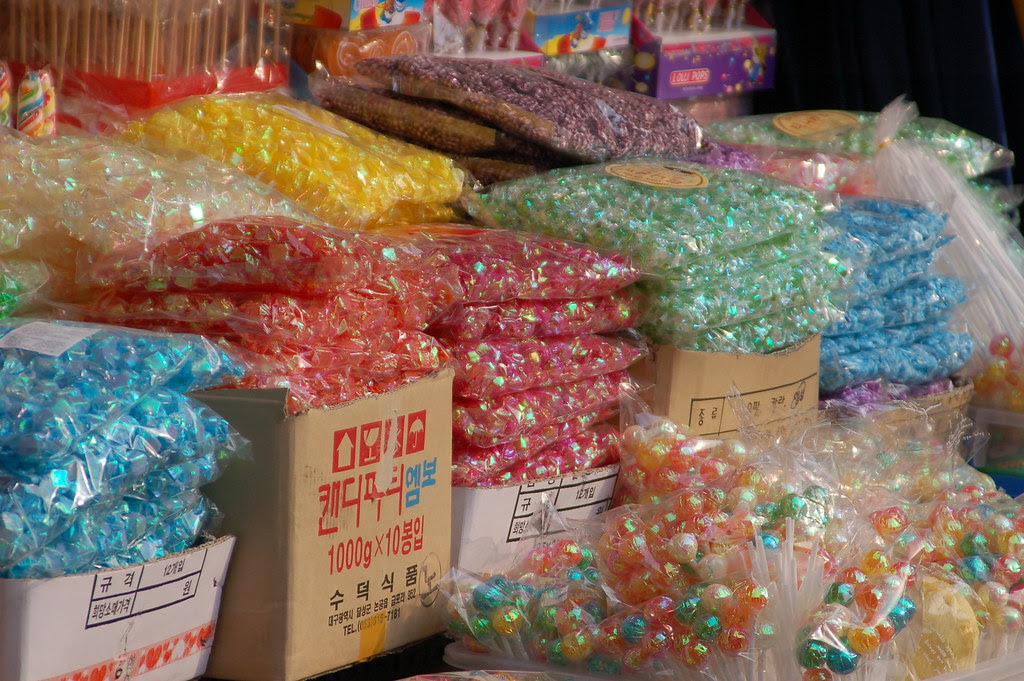 From what I saw while I was in Korea it looks like people are very into ginseng, the market and many other places I visited had the roots packaged in jars for showing: 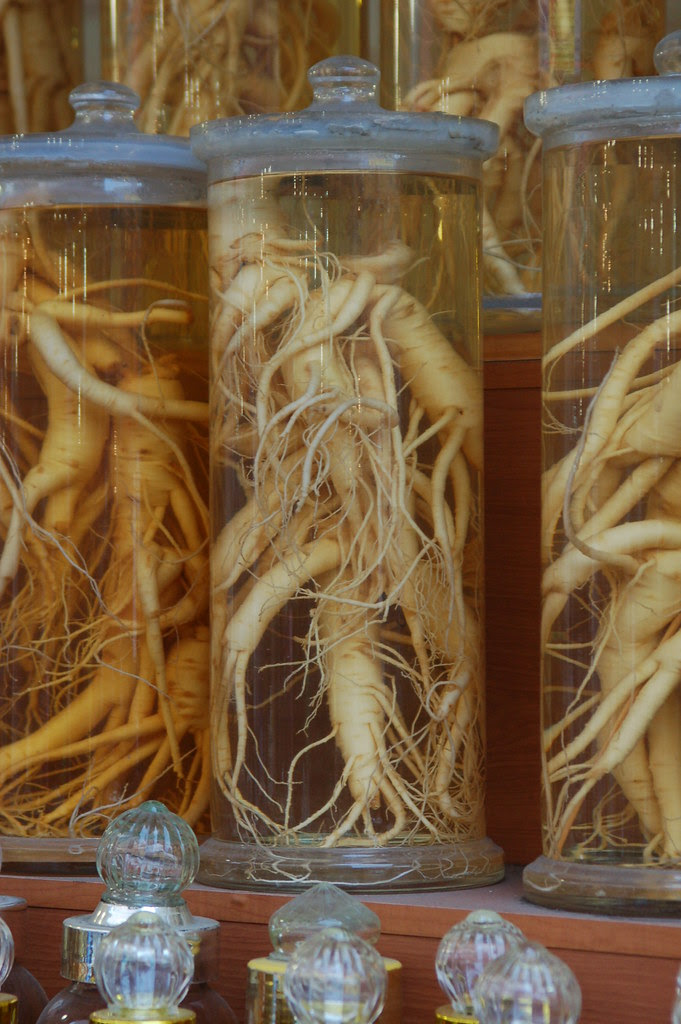 I rounded off my first day in Korea by climbing up the hill in the center of the city to the base of Seoul Tower the whole hill is a park with a trial/stairs that lead to the tower at the top. It was a nice day so I hiked up the hill: 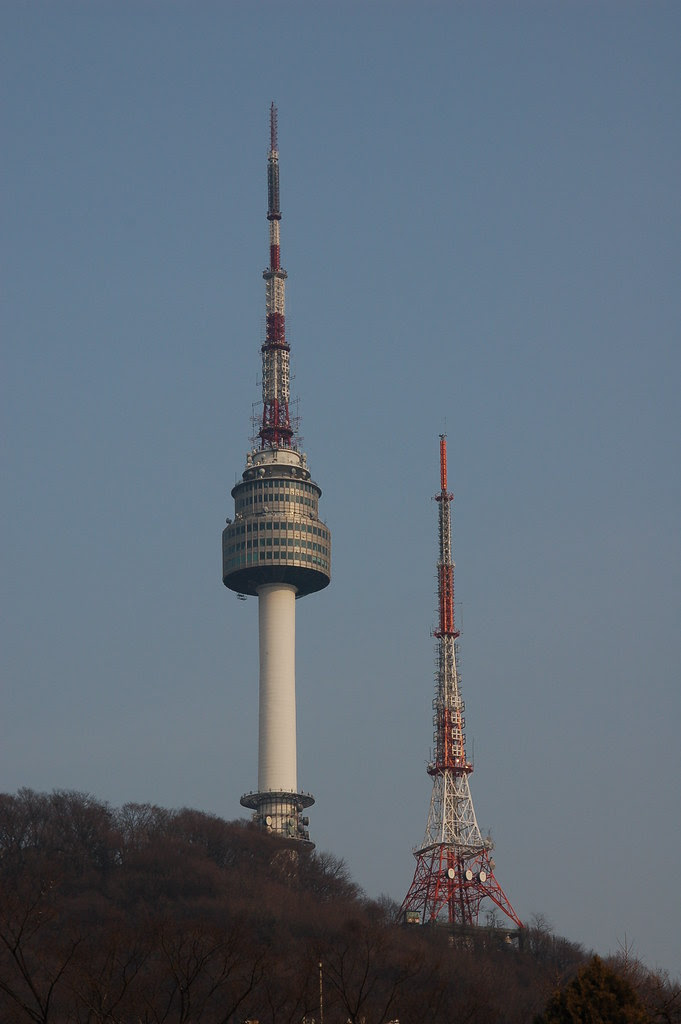 When I got to the top I saw the locks below locked to the fences around the tower, I've seen these elsewhere in Asia. Young couples buy locks and write something along the lines of "Jack and Jill love for ever" and then lock the lock to a lucky place and throw away the key, the idea being to lock their hearts together forever: 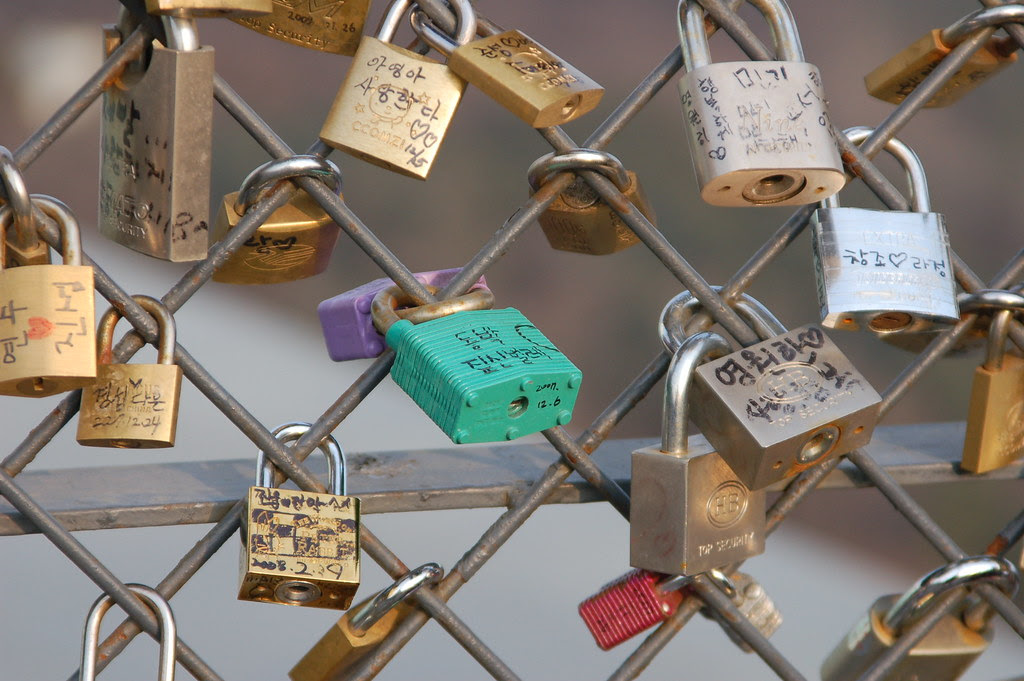 I went to the top of the tower which wasn't all the exciting because a sand storm in China combined with the smog from Seoul made the view not all that great. 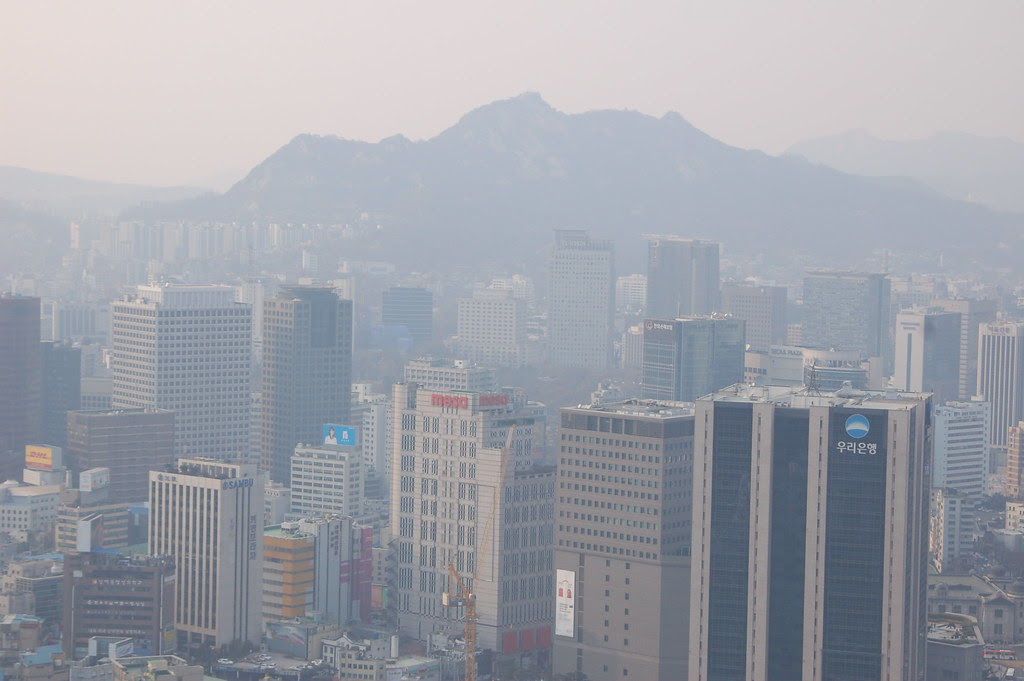 The tower had signs showing the distance from various places, as you can see below it's a long way home......... 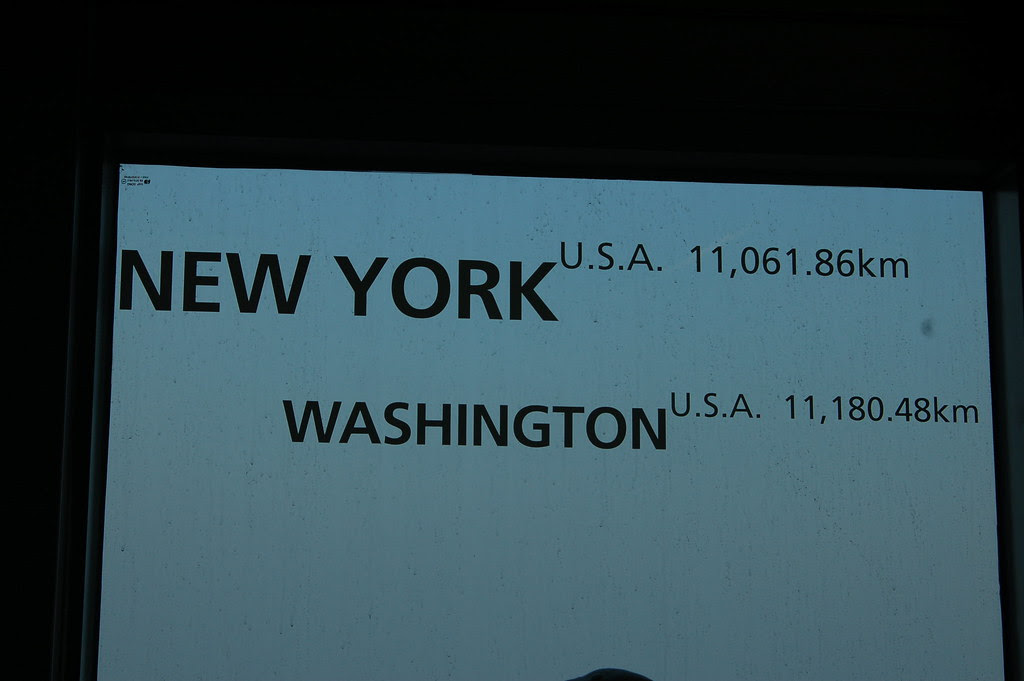 One really funny thing happened while I was at the top of the tower. I decided to hang sit down and relax for a while. I had my Nintendo DS with me and had been playing it a lot since Miho gave it to me a few weeks before. I had just finished winning "The New Super Mario Brothers" and I was playing it. A couple of Korean kids came over to see what I was playing and when they saw that I had won the game they called their friends over. I quickly had six Korean kids between the ages of 5 and 10 surrounding me and leaning in closely to see how to win levels in Mario. We couldn't talk to each other due to the language barrier but they kept pointing at levels and asking me to play them. Every time I won the level they thought it was amazing and got very excited. The thing I thought was amazing is the differences between the concept of up close and personal in Japan and Korea, half the kids were between me and the DS and it was in my hands, I could barely even see the screen. It was very entertaining.....
Posted by rrbhs99 at 6:28 PM 1 comment:

A number of people have asked me recently why my blog suddenly stopped earlier this month. I've been in China and it turns out that the Chinese government blocks google's blogger blog hosting platform, so my blog was blocked. I'm now in Vietnam and able to get at the blog again so I should have more updates soon, in the mean time I have been able to get photos onto the web here: http://www.flickr.com/photos/rrbhs99/sets

The trip for the past few weeks has been fantastic, I spent a few days in Korea and then about three weeks in China and I recently came to Vietnam.
Posted by rrbhs99 at 6:23 PM No comments: